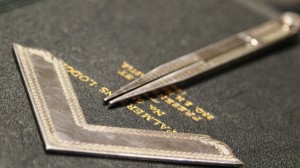 Freemasonry is a vast subject.  What is it in very simple terms?

Freemasonry’s message is about morality, free from the dogma of all the great religions, explained in the three degrees in a series of stories. The first degree is about a person’s birth, the second degree is about his life and learning through the science of geometry and the third degree is about his death, told through the story of Hiram Abiff who was the architect of King Solomon’s temple and was murdered to obtain his secrets.  The stories are told in a symbolic way which invite the candidate to draw his own conclusions without being told how he should interpret them.

In the middle ages, symbolism was told through heraldry to a population who in the vast majority of cases could neither read nor write. The illustration on a banner or the stained glass window of a church invoked a whole story to the viewer by the stimulating their imagination to write their own. That’s how it is with freemasonry, it invites you to draw your own conclusions through the symbolic story, and every Freemason in the world would have his own personal view of his experience.

There are no secrets as such, but if you knew the story beforehand, it would be difficult to draw your own conclusions without preconceptions. This is the reason that it appears to be a secret society. It would make no difference whatsoever if the secrets were told, in fact anyone could purchase a ritual book if they wished from Great Queen Street. However, the Masonic story would be undermined and spoilt by taking away the mystery and imagination, which allows the person to draw their own conclusions untainted by previous knowledge.

Official magazine of the United Grand Lodge of England